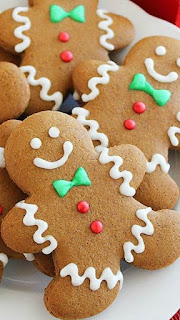 Hugh told Becca to stand in the corner at the northeast corner of their bedroom.  He loved that spot because she knew if she stepped out of line, the neighbors could catch a glimpse of her pink bottom.

“Where are you going?” she asked, not wanting to be away from him after such an intense disciplinary session.

Hugh shooed her along, popping her backside one time as she headed toward the corner of the room.  “I’ll be right there,” he said. “I just need to get something from the kitchen.”

Becca grinned and ran toward the corner of the room.

“Bring me a cookie,” she yelled, pretty sure there was some sexy whipped cream time in her near future and wanting a snack to keep up with Hugh’s momentum.

“What did you say?” he asked, annoyed that she had just been spanked and was ordering him around like her lackey.

“I said,” she hollered louder, “bring me a cookie.  The gingerbread men!  They’re on the cooling rack on the counter next to the oven.”  At that point it didn’t matter that the dough had been store bought and that the kids had decorated them.  She just wanted something to keep her energy going.

Hugh growled under his breath.  “Order me around,” he grumbled, “well, you’re the one getting more than a cookie!”

When Hugh appeared at the door of their room, he turned the lock and placed the cookie on the dresser. Then he stood behind Becca, just close enough that she could feel the heat of his body as he took off his clothes.  When he was completely naked, he took her shoulders and turned her towards him.

“Will you look at that!” she exclaimed, eyes wide looking down at him.”Are you sharing?” she asked coyly, reaching out to touch.

Hugh pulled away and marched her over to the bed.

“I want you to bend over and spread your cheeks,” he ordered.

“Can I have my cookie first?” she looked back at his steadfast face.

“Rebecca St. Clair!” he scolding and pushing her back over, placed a big red smack and outline of his handprint on her already ravaged butt cheek.

“Hey!” she hollered, reaching back and rubbing her bottom.

“Do I need to give you another one?” Hugh threatened.  “Now spread those cheeks.  I want to see that beautiful starfish of yours.”

Deciding the cookie wasn’t worth another slap, Becca pulled her cheeks apart waiting for the warm press of Hugh on her body.  He understood the minute required for her to adjust and open wide for him to enter her.  She closed her eyes at the first sense of him and then screwed up her face in a confused look. 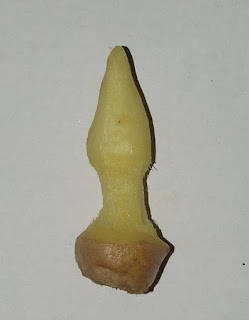 “Why are you so cold?!” she asked, her bottom getting that feeling but one that was way too cold to be her husband.

Smack!  Hugh’s hand came down on the back of Becca’s thigh as he pushed a bit deeper.  “Enough with the questions,” he scolded.  “You asked for this!”

As the icy object began to warm, Becca recognized the stingy burn that went with a thawing ginger plug.  She stiffened against the burn, causing it to intensify with the pressure of her muscles practically squeezing the oils from the root and into her skin.

“Hugh!” she whined.  “I said Gingerbread man, not ginger plug.”

The root continued to thaw as Hugh’s laughter filled the room.

“Guess I misunderstood with you YELLING at me,” he chuckled.

Becca squirmed on the bed and kept her hands in place, spreading her cheeks so as not to touch the root anymore than she had to.

“You can let go now,” Hugh said, placing her hands in front of her.

Becca moaned, the fire increasing with no relief as her cheeks came together.

Hugh waited a few more seconds and then pulled the plug back out, hearing Becca’s audible sigh of relief as he quickly tossed it in the waste can next to her vanity.

“I don’t believe we are going to have any more issues before the end of the year, are we?” Hugh asked, turning Becca over on her back.  She shook her head and allowed him to step between her legs, the mixture of a sore bum both inside and out keeping her focused on every word he spoke.

“Yes sir,” she replied and then quickly changed her answer.  “I mean, no sir.  I mean, what was the question again Is this a trick?”

Hugh laughed at her determination to give the correct answer but confusion as to what meant “no more issues”. Smiling, he leaned in and touched his nose to hers.

Becca wasn’t much of a talker during sex but Hugh had learned her body language and when she turned her face to the right side of her body, he knew it was time.  Keeping everything else the same, Hugh slightly increased the tempo and then took his thumb and pulling back the hood of her clit, began making crazy 8’s with the little button underneath.

Hugh continued to pump in and out until he too exploded in pleasure, grabbing onto her hips and holding himself steady as he downloaded every ounce he could spare.

The couple rinsed off real quick in the bathroom and then grabbed their clothes and got dressed before any little people realized they had snuck off.

“Can we just snuggle for a minute?” Becca asked, pulling Hugh over to the bed.  He reached over to the dresser and then climbed in, tucking his arm under his body so she could nuzzle into his chest.

“Hey, Becca,” he teased until she looked up at his face, “is this what you wanted?” he asked, holding a gingerbread cookie in front of her eyes.

“You brat!” she exclaimed, snatching the cookie from his hand and noticing immediately that it only had one leg.  “Where’s his other leg?!” she asked.

Hugh grinned.  “I had to make sure it was good enough for you,” he teased, breaking off an arm and popping it into his mouth.  Together they finished the cookie and then lay back against the headboard, enjoying the moment.

As Hugh cuddled Becca in his arms he was satisfied with her discipline and the calmness it brought to both of them.  And the make up sex was pretty amazing too!

Dear Readers, We have one more chapter to finish up this little Christmas gift from us to you. We hope you've enjoyed it! We definitely have had a great deal of fun writing it for you. Last Chapter will be posted by Friday. Come back and check it out on Amy's blog https://eric51amy49.blogspot.com/ . Merry Christmas! Baker and Amy